The importance of building cohesive and inclusive teams is a hot topic in the world of leadership development.

Whenever it comes up, my first thought is usually a story I heard by Simon Sinek several years ago. Sinek is a management theorist, trainer, and author of several works including Start with Why and Leaders Eat Last.

About Noah the barista

In one of his many fantastic talks on the subject of leadership, Sinek tells the story of a barista named Noah, whom he got to know while he was staying at the Four Seasons hotel in Las Vegas. Noah’s enthusiasm, authenticity, presence, and engaging personality stood out to Sinek so much so that not only did he end up leaving Noah a 100 percent tip, but he also found himself asking Noah questions about his job, trying to learn from him and what made him light up at work.

In his talk (watch a clip of it here), Sinek describes how he asked Noah if he liked his job, and how Noah—without missing a beat—declared, “I love my job!”

So then, Sinek asked him why he loves his job so much. Noah told him that throughout every day, managers check-in and ask him how he’s doing and if he needs anything to help him do his job even better. And it wasn’t just his manager checking in, it could be any manager at the Four Seasons.

Noah then took it a step further, and said that he also had a job at Caesar’s Palace. Noah told Sinek that there, managers were only concerned about him doing things “right,” and how it seemed like they were trying to catch employees doing things wrong. He said that when he was on a shift at Caesar’s Palace, he’d keep his head down and try to go unnoticed, whereas at the Four Seasons he could “be himself.”

The big takeaway is that while Noah is the same person doing the same job at the Four Seasons and Caesar’s Palace, because of his vastly different experiences with his managers, he was showing up in completely different ways. To me, it’s a perfect illustration of the difference you can make when you build a team that’s cohesive and inclusive.

But how does a manager go about building a cohesive and inclusive team?

It starts with you, the leader, and the tone you set.

Next, it requires three things: safety, communication, and alignment. They have to happen both in that order, and all at once. Let’s break them down.

As a leader, it’s incumbent on you to create a space where your team can openly share and be vulnerable; both with you and with each other, and both about what’s going on at work as well as beyond. 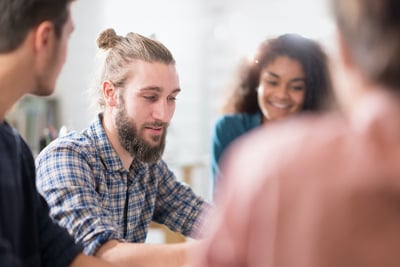 There are, of course, limits on that vulnerability, but your team members should feel comfortable discussing their long-term aspirations, their goals, their perceived strengths, and even (and especially) their weaknesses.

Safety is achieved when everyone on the team feels accepted and respected. They feel free to speak up without fear of negative consequences, so information is shared quickly and confidently without fear of making mistakes. When you know the values of each of your team members, and how those values connect to their work, their goals, and the goals of your organization, you can have a pretty good idea that you’ve achieved this kind of psychologically safe space.

Remember how earlier, I mentioned that these three things have to happen in order, and all at once? Strong communication requires safety, but safety can only be created through communication. A team that communicates well is one where expectations are clearly defined and discussed, where everyone knows what success looks like, and where they stand on the path to that success.

Communication is dialed in when information, requests of others, and expectations are shared clearly, which reduces inefficiency, frustration, and mistrust. So, if something stops working or isn’t done as expected, the first question should always be, “was my request communicated clearly?” If you think the answer is yes, make sure by asking your team what they thought you asked.

Just to show that even the most seasoned experts in these areas still mess up, this recently was an issue for me and my team. I made an unclear, indirect request over a Slack channel that was met with a noncommittal acceptance. When, a few days later, I didn’t get what I was looking for, the “why” was right there on my computer screen. I didn’t ask for what I needed directly, and I didn’t get a clear acceptance from my team. Communication broke down, and it didn’t get done, plain and simple.

A truly cohesive team doesn’t stop with psychological safety or established communication between a manager and each person; it also extends to the relationship between the team members themselves. When everyone on the team understands not just what they are doing to contribute, but what the other members are contributing as well, it multiplies the benefits of having psychological safety and solid communication within the team. Alignment is achieved when everyone is working towards the same goal — when each person feels a sense of purpose and understands how their work plays an important part in achieving a shared vision of success. Creating an aligned team takes time, usually dedicated time. Each person needs the opportunity to share their strengths and what they're proud of in their work, as well as where they believe they can grow. And each person should have some of this perspective about the other members of the team. Most teams don’t do this enough, and it’s really powerful. 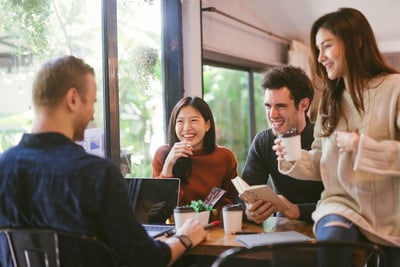 It’s only after this foundation has been laid that you can expect to have a truly engaged and connected team: one where everyone communicates with each other clearly, looks proactively for ways to help make each other's work better, more efficient, and easier, and one where each member is genuinely committed to helping each other succeed.

If you do each of these things well, ensuring that every member of the team feels seen, heard, and valued, it’s almost guaranteed that you’ll have an inclusive team. And, if you don’t, you’ll have a disengaged team whose members won’t consistently do their best work and, in the longer run, are likely to leave. Or worse, they won’t leave but will continue to put out less than their best, won’t work to improve, and will pass their attitude and experiences off onto not just the rest of the team, but other stakeholders and customers.

Putting employee interests ahead of the customers’

Daniel Meyer, the founder of Shake Shack, once said, “The interests of our own employees must be placed directly ahead of those of our guests…the way we develop bonds of loyalty with our guests is first to ensure our own team feels jazzed about coming to work.”

It might seem counterintuitive to put employees ahead of customers, but remember Noah? If you don’t create an environment where your employees and team members feel cared for, the way Noah felt when he worked at the Four Seasons, you can’t expect your team to step up to truly and genuinely care for your customers.

Without a cohesive and inclusive team, everything erodes. Profits, innovation, customer experience — everything.

With a cohesive team, you get the opposite. You’ll have a team of engaged, high-performing individuals who are more creative, innovative, and efficient in everything they do.

There are three essential parts to effective communication within a team. Putting these parts in place reduces each team...

As a leader, effective communication is your most powerful tool, and a double-check never hurts. “What we’ve got here is...