The answer to imposter syndrome

Right now, my imposter syndrome is writing about imposter syndrome. Sitting down to write this is not the first time I’ve felt it, either. Everyone feels it, it’s part of our human experience. And therein lies the answer to solving it.

Right now, my imposter syndrome is writing about imposter syndrome. No, really. As a white male, who’s been well-educated with a privileged background, I initially questioned what I could possibly add to this conversation. Who am I to talk about this? And when so many of the people who are struggling with it — women, people of color, marginalized communities — look nothing like me.

Sitting down to write this is not the first time I’ve felt it, either. Everything that’s happened in the last two years, with the rise of social justice and equity into our daily discussions, I feel passionate about. Still, I’m not totally sure where my place is in all of this. I want to be supportive, but I also want to show up, to be more than just an ally. Still, I recognize that, at this time and in this moment, that might not be my role.

So, I set out to educate myself as much as possible. I reached out to friends and colleagues and sought to understand what I was doing right, where I was going wrong, and how I could do better.

I’m not the first to take this approach. For many people who have imposter syndrome, their answer is to out-educate and outwork everyone else. And for many, it can lead to excellence and becoming an exceptional standout in their field. Many women I know have achieved this — working in male-dominant industries, they went as far as possible to become uber competent, and it has made them incredibly strong.

If your primary goal is to appear that you belong, and make it so no one can ever question otherwise, you might achieve that by becoming the very best at what you do. The issue with this, however, is that it can also be isolating and lonely, and make you appear hard and invulnerable to others. Furthermore, what if no one was ever questioning your belonging anyway? And what if hardening yourself and distancing yourself from others is hurting you and them? If the people around you may see a person who’s very competent and capable, but who also never shows vulnerability or weakness, they may assume that in order to be competent and capable they can’t show vulnerability or weakness either. And that means you’re actually perpetuating the dysfunctional cycle. 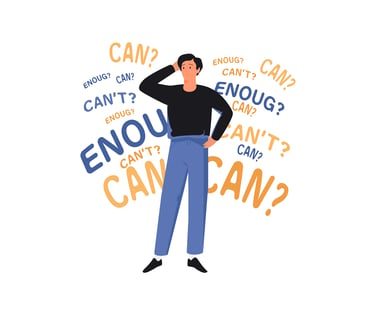 Recently, I joined a Zoom call to listen to a panel on a topic that I’m well-versed in, but also interested in learning more about. I thought I’d just be an observer, but before I knew it, the moderator directed a question my way. Talk about instant imposter syndrome.

I could have pretended like nothing was wrong, but it was apparent how caught off guard I was. So, I went with authenticity. I made a joke about how I didn’t know I was part of the panel, and showed the rest of the call that I was vulnerable. And then I used my knowledge and subject expertise to answer the question.

There’s something to learn here, both from my initial humility and my eventual answer. As long as you aren’t admitting basic incompetence or your inability to do your job (i.e., if I had said I was unable to answer the question), being vulnerable can often be helpful. It can make people feel safe. It can make people want to help you, which has been shown to make you more likable. It can create conversations and inspire questions that might help more people than just you.

Curiosity for the win

Maybe the true answer to imposter syndrome isn’t out-learning or out-working everyone else, but just being more curious. Ask all the questions. Admit when you don’t know, and ask for guidance. Let people know when you don’t understand something, and see if they can help you.

One last story… A year ago, my daughter started playing hockey at the age of ten. For those of you who don’t live in hockey-crazed states like Colorado, that’s a bit later than normal. She was playing with more experienced kids, and often getting down on herself about it.

Her coach continually reminded her in these moments that, at one time, every person on her team was a beginner. Everyone could relate to her, and everyone could help her. Every other girl on the team had, at one point, felt inexperienced and insecure.

It’s true for more than just girl’s hockey. It’s true of life in general. It’s true even for me. Everyone, regardless of their gender, race, or background, has felt excluded and insecure at times. It’s part of our human experience. I believe that recognizing this in myself, and approaching it with curiosity, authenticity, and vulnerability, is the answer.

Have you been feeling imposter syndrome lately? At Lead Belay, we’re here to prove you’re not alone, and help you know that you belong.

On a biological level, our five senses (sight, smell, hearing, touch, and taste) allow us to form connections with other...

The word authenticity is used so often these days; it almost seems like a fad. Will it eventually fall by the wayside? D...

Inclusion is different from belonging. Companies who are successful in making inclusion pay off strive to make their emp...